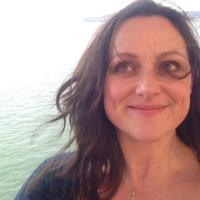 Hi Rachael, welcome to Bookaholic Confessions! Thank you so much for participating in this interview. I’m absolutely thrilled to have you on my blog! Would you like to start by introducing yourself…?

Hello! I’m Rachael, and I live by the seaside in the North West of England with my partner and my four children. I’m originally from the Highlands of Scotland, and I wrote my first book when I was eleven. (It was terrible!)

Can you tell us a bit about your latest (fabulous) novel, Wildflower Bay? (Released 11th August 2016 with Pan)

Wildflower Bay is set on the island of Auchenmor in Scotland. It tells the story of three people: Finn, who is a bit tired of bed-hopping to escape the demons in his past, and who envies his best friend Roddy’s settled life, Isla, who is forced into taking a job in her aunt’s grim little salon when disaster strikes back home in Edinburgh, and eighty year old Ruth, who wants to bring her family together.

What inspired the storyline behind Wildflower Bay?

When I wrote Sealed with a Kiss I knew what Finn’s back story was so it was a tale I wanted to tell, and there was a character in my head who I knew would be the PERFECT match for him, and so I knew that I’d always go back to the island to continue the story. Also island life is so interesting and intriguing that I could write countless books about Auchenmor!

Are your lead characters Isla and Finn entirely fictional or are they based on anyone in real life?

Isla and Finn are both completely fictional, but Ruth is very much based on my late grandmother – to the extent that my sister called in tears to say that she loved that she was there on the page, which was lovely. (Not that she was in tears, but that I got her character right!)

How do you go about doing the relevant research for your books?

I spent a weekend back on the island of Bute, which is the setting for Wildflower Bay – Kilmannan is Rothesay, and Auchemor is Bute – where I wrote the beginning of the book, soaked up island life, and spent time just wandering around thinking about how it would feel as a city person to land there friendless and alone. When I lived on the island (years ago) we discovered an empty house hidden by acres of woodland and discovered the story of Woodend House, and I always knew I’d use it in a book. It became the setting for the hippy retreat where Lily lives and works.

Your novels are absolutely overflowing with fantastic reviews over on Amazon. How does it feel when you hear that a reader has enjoyed one of your books?

It is the loveliest thing! Sometimes when I’m writing I’ll get an email from a reader who has contacted me via my webpage, and that is just amazing. Writing is such a strange, solitary pursuit, and it’s so nice to know that people are enjoying the stories out there in the world. I still can’t quite believe that I get to do this as a job!

Yes, always. I was eleven when I wrote my first book – I typed it all on a typewriter and sent it off to Pan, who are now my publisher. They told me it wasn’t quite right for them but to keep writing and luckily I did! I studied English at university and have always loved books and reading, so it is a real honour to actually write for a living.

What advice would you give to any aspiring novelists out there?

I always say the same thing – FINISH SOMETHING. I do creative coaching as well as writing, and the biggest hurdle is actually getting people to keep the momentum going until they hit the end. There are loads of amazing writers out there with 20,000 words of a novel in a drawer (or on their hard drive). The secret is to get it finished, then look at the big picture and work out what works and what doesn’t.

I read incredibly widely and have an appalling memory, which means that I am always hopeless at this sort of question. Looking at my shelves to my left, I can see Joanna Trollope, Mary Wesley, Jilly Cooper, Edith Wharton, Jane Austen. More recent favourites would include Liane Moriarty, Elif Shafak and Lionel Shriver. This answer would change if you asked me in half an hour!

I’ve just finished the edits on the YA novel I have coming out next April – it’s called The State of Grace and is the story of Grace, who is fifteen, has Asperger’s, and is trying to negotiate friendship, first love, and a family coming apart at the seams.

I’m also working on a new adult novel which will be out next year some time – and I’ll be taking a couple of months from September to get that written, just as soon as Wildflower Bay is published. But before all that I have two weeks in Spain with NO internet, which after writing two books in a year is very much needed!

A huge thank you to Rachael for answering my questions. Click here to get hold of your copy of Wildflower Bay.