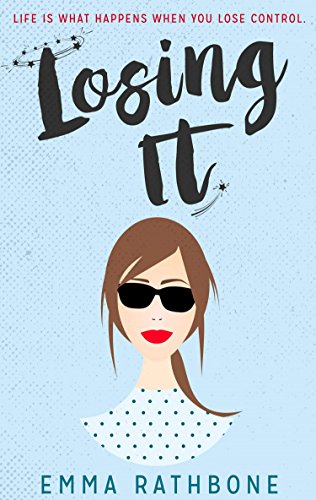 Twenty-six year old Julia Greenfield has long suspected that everyone is having fun without her.

She hasn’t done anything spontaneous since about 2003. Shouldn’t she be running a start up? Or going backpacking? Or exploring uncharted erogenous zones with inappropriate men?

Trapped between news of her mother’s latent sexual awakening and her spinster aunt’s odd behaviour – Julia has finally snapped. It’s time to take some risks, and get a life.

After all – what has she got to lose?

Julia Greenfield’s life is not panning out the way she had hoped. Unhappy in her job in Washington after failing to make the Olympic standard in competitive swimming, she feels as though life is passing her by and she should be out there gaining new experiences. Julia also has a rather burden that she is desperate to rid herself of…
So what exactly does the ‘it’ stand for in ‘Losing It’? Well, ‘it’ just happens to be her virginity. Julia has made it to the grand old age of twenty six and for various reasons, she still has her V-Plates. It gets to the point where her whole life becomes consumed with ‘doing it’ or rather her lack of ‘doing it’, until the point where she decides she is going to North Carolina to visit her 58 year old aunt, and hopefully get herself a life (and a boyfriend?) in the process.

I was really excited to read Losing It, the synopsis intrigued me and although it turned out to be a different story to the one I had imagined, it was still a really enjoyable, thought provoking and often funny read.
Not only was it full of quirky characters, but I felt as though it really provided something just that little bit different. It’s a highly unusual story and whilst Julia was not always easy to like, I still found myself routing for her and hoping that she got what it was she truly wanted out of life.
The thing that I liked most about Losing It was it’s sense of realism, especially when it came to the tricky subject matter of virginity. Julia is not portrayed as some whiter-than-white girl who loses her virginity to a background chorus of harps and birdsong. Julia and the difficulties she faces have not come straight out of some slushy rom-com movie. They are very real and faced by millions of other girls. It can be confusing to know where you stand – is your virginity really a burden that is to be lost at the first appropriate moment? Or is being a virgin something which is only a big deal when you build it up to substantial proportions? I loved the themes that Emma Rathbone covers in this novel and definitely found it more thought provoking than I expected to.

Perfect for fans of Bridget Jones or anyone who likes reading about the internal battles women face on a daily basis. You’ll be able to relate/laugh/scream in frustration along with Julia in this funny, charming coming-of-age story.

A huge thank you to Cara at HQ Stories for the opportunity to review Losing It.

Emma Rathbone is the author of the novel The Patterns of Paper Monsters. She is the recipient of a Christopher Isherwood Grant in Fiction, and her work can also be seen in the New Yorker, the New York Times, and the Virginia Quarterly Review. She is also a writer for the upcoming Netflix comedy, G.L.O.W. She lives in Los Angeles.