When Zoe Walker sees her photo in the classifieds section of a London newspaper, she is determined to find out why it’s there. There’s no explanation, no website: just a grainy image and a phone number. She takes it home to her family, who are convinced it’s just someone who looks like Zoe. But the next day the advert shows a photo of a different woman, and another the day after that.

Is it a mistake? A coincidence? Or is someone keeping track of every move they make…

When on her daily commute on the London Underground, Zoe Walker is both horrified and confused when she sees a picture of herself in the classifieds section of a freebie newspaper. The advert seems to be linked to some kind of dodgy dating site and whilst Zoe’s family are unsure as to whether the grainy picture is even of her, Zoe senses that something strange is going on. When a new woman’s face appears in the add every day it soon becomes apparent that something sinister is going on…
Kelly is an officer working for the British Transport Police. After investigating a theft on the Underground, Kelly is intrigued when Zoe gets in touch and she discovers that the victim of the theft also appears in the Gazette.
What do the women appearing in the paper have in common? Why are they being targeted? And what is the significance of these mysterious adverts…? Both Zoe and  Kelly are extremely keen to find out, but for very different reasons…

I See You is one of those books that sent bloggers and reviewers (including me) a little crazy when it was released in the summer. It went straight onto my TBR and I have no earthly reason as to why it’s taken me so long to get round to this unnerving and quite frankly, terrifying, novel.
I was fascinated by the premise of this story. It’s based on such a smart and original idea and it works so well because you can’t help but put yourself in Zoe’s shoes right from the start. Zoe is pretty much your average women, two kids, nice house, good job. Like thousands of other people, travelling on the underground is a part of her everyday routine. She could be any one of us. We all have routine; things that we do every day without thinking. But I See You WILL make you stop and think about the actions that we perform every day…And it will also make you think – what if someone is watching me? This aspect of the book also really creeped me out; it made me suspicious of everyone. Do we ever really know what people are thinking? Is everyone really harmlessly making their way to work in the morning, or do they have a more sinister motive? ARGH. The whole thing made me shiver and turned me into a paranoid mess.

I was also desperate to discover exactly what was going on with regards to Zoe’s picture appearing in the paper. Was it really Zoe? And if so why? Where did they even get Zoe’s picture from? What was this all about? I had so many questions and the further into the story I delved, the more intrigued I became as to what this mystery was really all about.

Clare Mackintosh is such a smart writer. The way in which she introduces us to a range of supporting characters throughout the story and then proceeds to make you suspicious of every single one of them is fantastic. I will freely admit that I had no idea who was behind this chilling case and I was absolutely knocked for six when I discovered the culprit. Clare had managed to mask their identity whilst weaving the plot to a mind-blowing ending as things start to slot into place.

Be warned before picking up this book, not only will it unsettle and bring you out in goosebumps, it will also be permanently welded to your hands once you start reading.
I See You is terrifying page turner and one of the best thrillers of 2016 (which is no easy feat as there have been SO many good thrillers so far this year.) 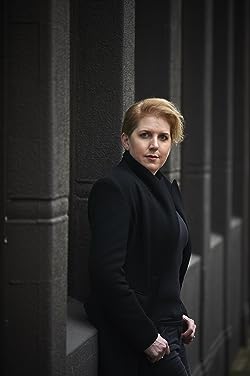 Clare Mackintosh spent twelve years in the police force, including time on CID, and as a public order commander. She left the police in 2011 to work as a freelance journalist and social media consultant and is the founder of the Chipping Norton Literary Festival. She now writes full time and lives in the Cotswolds with her husband and their three children.

Clare’s debut novel, I Let You Go, is a Sunday Times bestseller and was the fastest-selling title by a new crime writer in 2015. It was selected for both the Richard and Judy Book Club, and was the winning title of the readers’ vote for the summer 2015 selection, and ITV’s Loose Women’s Loose Books.

Clare is the patron of the Silver Star Society, an Oxford-based charity which supports the work carried out in the John Radcliffe Hospital’s Silver Star unit, providing special care for mothers with medical complications during pregnancy.

4 thoughts on “Book Review: I See You by Clare Mackintosh”