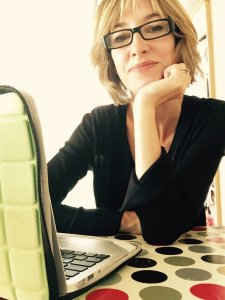 When and why did you start writing?  I don’t think there was particular start date. I’ve always enjoyed writing and almost always, with just a couple of dark exceptions, with the purpose of making people feel better about themselves and about life.  I enjoy writing so much that it feels like a guilty pleasure – like sneaking off for an iced bun while everyone else is munching on salad.  Consequently, my first novel, Reading Upside Down, was written only in my sparest of spare time and very furtively.  My husband and children knew I was writing, but I told no one else until the first draft was finished.

Has writing your second novel, It Was You, been a different experience to writing the first?  Yes and no.  My approach and intention was the same: to have fun, to celebrate life in all its unpredictability, and to entertain.  The big difference has been the benefit of having others alongside me to comment and question.  I say it has been a benefit, but that’s not to say it’s always been easy.  I wrote Reading Upside Down in such isolation that that the first impartial comments I received were from Amazon reviewers when I self-published.  In the case of It Was You, those comments were made at a much earlier stage in the process, firstly by my agent and then by various editors here and overseas.  That came as a little bit of a shock but was ultimately very helpful.  When you’re writing a book over, say, the course of a year, you can get so totally absorbed in the plot and the characters that it’s easy to forget the reader isn’t as well aquatinted with everyone and everything as you are.  Impartial voices remind you of that.

What is It Was You about? It is about Alice, a 32 year-old interior designer, and her friendships, in particular within The Short Book Group.  She has been single for almost two years, following the explosive conclusion to her previous relationship, and when her book group friends question her reluctance to meet a man, even for a no-strings coffee, she decides it’s time to start dating again.  It’s a story which made me both laugh and cry as I wrote it and I hope it will do the same for the reader. If I had to sum it up, I’d say it’s a book about keeping secrets – from yourself and from other people.  And if there’s a moral to the tale, it’s honesty is the best policy. 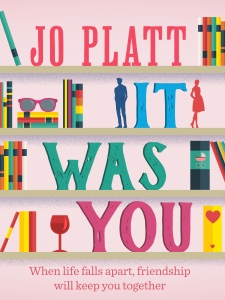 What was your inspiration for the plot? There were a million mini-inspirations, including a friend of a friend who took up battle re-enactment! But the core of the story was inspired by a visitor who was looking through photographs and commented that my friend’s husband was very attractive.  I couldn’t see it at all (although, if he’s reading this, I’d just like to remind him that I’m not drawn to Brad Pitt either). This led to a discussion about whether there are people whom you don’t, or can’t, find attractive because of their ongoing relationship with you – for example, if they have been a friend for years and years, or they are the partner of a friend.  I then thought about how unsettling it might be if feelings on either side of such relationships began to change.  Would you recognise or understand the feelings? And how would you react?

There is a high percentage of dialogue in your novels. Why is that?   I sometimes wonder if I’m actually a frustrated script writer! I’m certainly a talker, a listener and a shameless eavesdropper. The chatter of family and friends is an endless source of the funny and the heart-breaking, and people say the most unintentionally revealing things at checkouts, in post office queues and, of course, when they’re shouting into their mobile phones. Day to day, people and their conversations (even the ones which don’t involve me) are what I’m interested in and I guess that’s reflected in my writing.

It Was You was published by Canelo on 31st October price £1.99 as an ebook