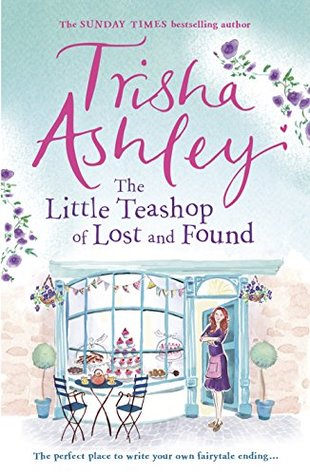 Alice Rose is a foundling, discovered on the Yorkshire moors above Haworth as a baby. Adopted but then later rejected again by a horrid step-mother, Alice struggles to find a place where she belongs. Only baking – the scent of cinnamon and citrus and the feel of butter and flour between her fingers – brings a comforting sense of home.

So it seems natural that when she finally decides to return to Haworth, Alice turns to baking again, taking over a run-down little teashop and working to set up an afternoon tea emporium.

Luckily she soon makes friends – including a Grecian god-like neighbour – who help her both set up home and try to solve the mystery of who she is. There are one or two last twists in the dark fairytale of Alice’s life to come . . . but can she find her happily ever after?

Alice Rose has never really felt as though she fitted in. After a traumatic start to life with being abandoned by her birth mother on the Yorkshire Moors and following the death of her adopted father, Alice has struggled to settle anywhere and make a go of her life.
However, when her fiancé dies in a tragic accident, this proves to be the final straw for Alice who has had enough of running from her problems and decides to tackle life head on. How does she go about this? By returning to her birth town of Hadworth and buying her very own teashop. It just so happens that she hasn’t actually seen the tearoom beforehand and, well, let’s say it’s not exactly as she imagined…

As well as putting into place a major refurbishment on the cafe, Alice decides to also put in place a major overhaul on her life. Baking has always been the one constant in Alice’s life, so surely once the cafe is up and running her love of creating magic from flour and butter will help to heal her broken heart…and she also hopes to piece together some of the vital pieces from the puzzle of her life whilst she’s back in Hadworth.

If a gooey chocolate sponge is your favourite comfort food, then a Trisha Ashley book is the comfort-food equivalent. (Only without the calories – BONUS!)

Few things are guaranteed in this world (apart from me never winning the lottery and it raining when I have straightened my hair) but another thing to add to this list is getting immense enjoyment out of a Trisha Ashley book. Because the more of her books I have read over the years, the more this has proved to be a constant.

As a chick-lit fan I have certainly noticed the trend in books being released which involve tea-shops, cafes, bakery’s and any other establishment that serves a Victoria sponge. This isn’t necessarily a bad thing (who doesn’t love a romance set against the backdrop of a cooling Victoria sponge!?) but there is the risk of the format becoming a little old. However, The Teashop of the Lost and Found is a million miles away from this territory; in fact it’s quite original in it’s storyline as you don’t just have Alice and her battle to renovate this past-its-best-before-date teashop and turn it into a high quality establishment, but you also have the fascinating mystery of her birth running alongside this. As the story progresses you discover more about Alice and also more about her birth parents. As a reader it was really interesting to read the snippets from Alice’s mother, which let us in to some of the emotions and thoughts that were running through her head at the time. I felt it was important that this was included and the more we discovered the more intrigued I became, fully getting into cannot-put-this-book-down territory.

As well as attempting to fit together the puzzle of her past and get the tea-room up-and-running, Alice also likes to write fairy-tales (but not your average fairy-tale I hasten to add…). I felt this added such an interesting take on the story and gave it just that little bit of zest. The significance of Alice writing these fairy-tales is certainly not lost on the reader with regards to the connection to her beloved adopted father and then – of course – involving the crucial question – will Alice get a fairy-tale ending of her own?

I really need to talk about Alice. I loved this girl with every fibre of my being. She was one of those people who life has always dealt an unfair hand…At times I was just thinking ‘Jeez, give the poor girl a break.’ She has been treated like rubbish by those who were meant to care about her the most, and yet she hasn’t let this make her bitter or jaded. Where she finds the strength from to battle life in the way in which she does I have no clue (maybe it’s from those gorgeous sounding cakes she is so fond of making!?) I loved her determination and how set she is on achieving her dreams and never giving up. Characters such as Alice are just so easy to like and you can’t help but cheer them on every single step of the way. She’s a really inspirational character and one who you cannot help but greatly warm to.
Trisha Ashley has rustled up a fantastic cast of supporting characters to help Alice with the challenges that she is facing. This goes to show that we can tackle anything with the support of others along the way and I love the positive message that this novel sends out.

I loved pretty much everything about this book. I’d even go so far as to say it’s probably one of my favourite Trisha Ashley books to date (and that’s a big admission because I have loved each and every one of her books.) Fascinating characters, humour, romance (c’mon – this IS a Trisha Ashley book…) a gorgeous setting, plus tea and cake in abundance, this is a hugely enjoyable, comforting and all-round lovely story. Well written and full of warmth, Trisha’s writing flows extremely smoothly and is a joy to read. Although, over the years, I have come to expect nothing less from Trisha. If you’re yet to try her books then this would be a fantastic one to try…I guarantee you won’t look back. It’s as comforting and equally as satisfying as a fluffy lemon drizzle cake…*

*That’s the last cake-reference. I promise.

A huge thank you to publishers Transworld and to Poppy Stimpson.