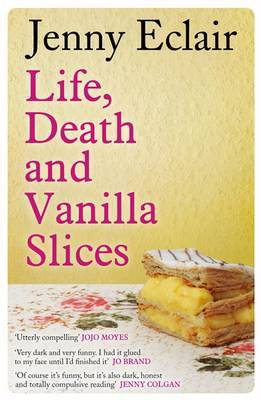 Jean Collins had two daughters. But she only loved one of them.

She knew it was wrong, but she just couldn’t help herself. Jess was a little sweetheart, everyone said so. Anne was awkward and serious and not much fun, to be frank.

But now the years have passed. Jess is missing – run off long ago, no one knows where or why. So when Jean is left in a coma after a road accident, it’s Anne who travels back up north to sit at her mother’s bedside. And she wonders – why did Jean dash out into the road without looking? What distracted her? And why was she carrying a box of vanilla slices, the cream cakes she only ever bought for extra special occasions?

Meanwhile there are secrets waiting for Anne and Jean, back at the old family home. Secrets that were buried a long time ago…

Life, Death and Vanilla Slices follows the lives of Jean and her daughter Anne. The story starts off with Anne living out her middle aged existence with her despondent husband and spoilt teenage sons. She no longer has much contact with her Mum, Jean, after a difficult relationship between the two when Anne was growing up.
Anne now feels that she has ‘escaped’ from her old life and bettered herself after attending University and marrying a wealthy Surgeon, Paul, and has tried to forget her childhood as best as she can. That is until she gets a phone call out of the blue informing her that her Mother has been involved in an accident and is in a coma.
The story then follows Jean’s thoughts from her coma, re-living memories of the past, whilst jumping to Anne in the present day as she deals with various memories from the past that she would rather forget…

When I saw the title of this book I assumed it would be some hilarious novel, especially as the author is a well known comedian. However I was really surprised as Life, Death and Vanilla Slices is nothing how I imagined it would be. The story is actually quite dark yet it’s written in a funny way. So it’s not so much the story that’s amusing but the way in which Jenny Eclair tells the story that’s funny. I really enjoyed the way in which this story was written aswell with two storylines running alongside each other. We have Jean and her memories, reminiscing back to the 1960s and Anne trying to make sense of things in the present day. I particularly loved reading Jean’s memories and trying to piece together what went on between Mother and Daughter to make things the way that they are between the two. However, Anne’s chapters were equally as fascinating and the more you read the more their stories seems to unravel. I found it really interesting the way that a woman’s role was highlighted to show just how different life was back in the 60s compared to now. There’s no doubt that Anne is a hilarious character. Despite being older than your usual lead character in these types of novels, she is humorous and interesting and at times I found myself feeling really sorry for her (especially when she was a child). Feeling sympathetic for the characters is something I found strange in this novel. For example one minute I would be feeling for Jean and deciding I liked her, the next hearing from Anna and deciding I didn’t. Despite all this I think that both characters would be too difficult to actually dislike, so it’s a bit of a strange one – you don’t really feel as though you can make a judgement on either of them until you find out the whole story.

However some characters which I can say I certainly didn’t like were Anna’s husband and her two teenage sons. The odd chapter is told from their point-of-view which is insightful and makes for an interesting read but you really do feel like giving them a good slap around the face at times! They are so selfish and treat Anne appallingly. I then once again found myself feeling sorry for Anne, but at the same time not being sure if I should be feeling sorry for Jean instead. Despite all of this you find yourself really caring for these characters after all that they’ve been through.
There are some fantastic twists to the story though; especially involving some of the neighbours and I found myself eager to find out how various parts of the story fitted together.
Whilst this is a brilliantly written, gripping story it’s also surprisingly sad in some parts and has a really powerful storyline. The ending came as a complete surprise to me and I felt the whole story really highlights the sometimes difficult relationships between Mothers, Daughters and Sisters. There’s a bit of everything in Life, Death and Vanilla Slices – it’s tragic, funny, fascinating and most of all, a really enjoyable read.

Jenny Eclair is an extremely popular broadcaster, comedian and actor. She is the sole female winner of the Perrier Award, and often features on BBC radio and television.
Website  Twitter  Goodreads