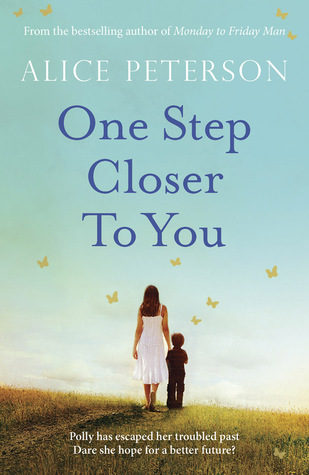 After Polly ends her relationship with the father of her young son, Louis, she is determined to move on. All she wants is to focus on her job, her friends and to be a good mum. No more looking over her shoulder. No more complications . . . Then Polly meets Ben.
Ben is guardian of his niece, Emily. They become close, with Polly teaching Ben how to plait Emily’s hair, and Ben playing football with Louis. Their friendship is unexpected. Polly’s never been happier. But when Louis’s dad reappears in their life, all Polly’s mistakes come back to haunt her and her resolve weakens when he swears he has changed.

Will she give herself a second chance to love?

Single Mum to Louis and former alcoholic, Polly, is shocked to see a fellow parent from the school gates at her latest AA meeting. However, after some investigating it turns out that the Dad in question, Ben, isn’t a Dad at all. He’s been made guardian of his niece and one of Louis’ classmates, Emily, after the sudden death of her mother and he’s struggling to come to terms with his newfound role and the conditions that come with it (How is he supposed to know how to plait hair??!)
A recovering alcoholic himself, Ben soon discovers that he has lots in common with Polly and they develop the strongest of friendships, going on holidays together and becoming a close-knit little family of sorts (although Polly and Ben value their friendship far too much for anything to happen between them, of course…)
However this doesn’t stop Louis from asking difficult questions about his father, Matthew, a man who Polly would really rather forget.
But just as she feels as though she is moving on from the dark and difficult days of her past, who should turn up but Matthew himself. He promises Polly that he’s changed and wants to be a part of Louis’s life. The only problem is he wants to be a part of Polly’s life too, much to the upset of Polly’s friends and family…and of course, Ben.

I am a huge fan of Alice Peterson’s books. Monday to Friday Man is one of my all-time favourite novels so as you can imagine I was one very excited book blogger when I was given the chance to review her latest release, One Step Closer To You. The synopsis sounded so good that I was expecting this novel to rival Monday to Friday Man and for me, it certainly did!

The thing I loved most about this novel was Polly. As a recovering alcoholic she has had one heck of a tough life and certain chapters of the story travel back in time to Polly’s childhood, where we find out how she got hooked on alcohol in the first place, how she met Matthew and the destructive relationship between the pair that followed. The thing I liked most about Polly’s situation was that it was real. She’s just a normal person who made a few wrong decisions and mistakes along the way but I guarantee you’ll be rooting for her. Then there’s her brother, Hugo, who is also pretty amazing. Hugo is blind and he is such a funny, lovely guy. You can’t help but admire the bond he shares with his sister and his love for Polly will break your heart.

I also loved Ben and Emily. Ben is really thrown in at the deep end after the death of his sister and it’s touching watching him try to adapt to becoming a parent. It’s completely heart warming watching Ben and Emily’s relationship blossom (you WILL cry…don’t say I didn’t warn you!) and I found myself feeling increasingly proud of Ben and I know that his sister, Grace, would have been extremely proud of him too.

One Step Closer To You is one of those novels that will make you ask yourself what you would do if you were in the character’s situation, and I personally always enjoy stories like that. It’s all too tempting to reject Matthew out of hand when he comes back into Polly’s life, but as Polly herself has proved – doesn’t everyone deserve a second chance? I fell in love with Alice’s writing; she portrays the difficulties of her characters with a heartfelt emotion and really makes them come to life. You’ll experience every emotion along with Polly, happiness, fear, uncertainty, and her love for Louis and Hugo.

I hugely admire Alice for writing with such understanding and for all of the research that she puts into writing about tricky subjects such as disabilities and addition and that’s what makes her books nothing like your typical run-of-the-mill romances. One Step Closer To You is a special novel, it’s so emotional it’ll make you bawl your eyes out, yet it’s uplifting at the same time. An all round addictive read which has once again confirmed my love for Alice Peterson’s fantastic novels.

I’d like to say a massive thank you to Margot at Quercus for very kindly sending me a copy of One Step Closer To You to read and review.

I write romantic comedies with humour and compassion. Nothing makes me happier than when a reader tells me my book made them both laugh and cry. I enjoy writing about love and romance and my books always have the feel good factor, but I also like to take the reader to a darker place where my characters have to overcome adversity. I think this is partly due to my own life experience of living with Rheumatoid Arthritis, which I wrote about in my memoir, A WILL TO WIN, now republished as ANOTHER ALICE.

I have written four novels for Quercus. MONDAY TO FRIDAY MAN is set in the dog walking world of Ravenscourt Park, inspired by my best furry buddy, Darcy. MTFM knocked 50 SHADES OF GREY off the Kindle No. 1 spot and has sold across all editions 500,000 copies. TEN YEARS ON and BY MY SIDE followed. ONE STEP CLOSER TO YOU, my most recent novel, will be shortly published this September 25th 2014.

4 thoughts on “Book Review: One Step Closer To You by Alice Peterson”