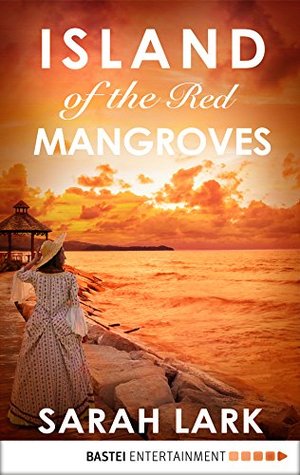 Jamaica, 1753: Deirdre, daughter of Englishwoman, Nora Fortnam and slave Akwasi, lives a sheltered life on her family’s plantation. Her stepfather, Doug, has welcomed her into his life as his own. Despite Deirdre’s scandalous origin, the men of the island flock to the young beauty, but she shows no interest. That is, until she is charmed by young doctor Victor Dufresne, who asks for her hand in marriage.

After their lavish wedding ceremony, Victor and Deirdre embark to Saint-Domingue on the island of Hispaniola, where Deirdre can live without the burden of her mixed background. But what happens there changes everything …

Living on the Cascarilla Gardens in Jamaica, Deirdre Fortnam is approaching her eighteenth birthday. The daughter of Nora Fortnam (who you will remember from Book 1 of the series, Island of a Thousand Springs) and step daughter to Doug, Deirdre’s biological father was a slave named Akwasi. Deirdre is living a quiet life on her family’s plantation and has no interest in men. However, everything changes the night of her eighteenth birthday when she meets Victor Dufresne. Victor is a young doctor who has been away studying medicine and is now ready to return the French Island of Hispaniola where he originates from. Deirdre marries Victor and the pair leave Jamaica to start their life together in Hispaniola. However it soon emerges that their story doesn’t end here. Life is difficult in Hispaniola and Victor’s family are very different to Deirdre’s own, especially where their opinions on slavery are concerned.
It’s not long before the drama unfolds as Jefe and Bonnie are introduced to the story, along with the formidable Macandal…

I really enjoyed the first book in the Caribbean Islands series, Island of a Thousand Springs (my review can be found here) so I was really looking forward to reading the second installment by Sarah Lark and it certainly didn’t disappoint.
It was such a joy to re-visit certain characters from book one. I especially enjoyed becoming re-acquainted with Nora and Doug after being completely enchanted by their original story all those years ago.
Race plays both a fascinating and unsettling role in this story. If you are familiar with book one then you will know that Deirdre is the result of an illegal affair between Nora (a white woman) and Akwasi (a black slave). Deirdre is a fierce heroine; brave, passionate and extremely likable and you cannot help but be drawn into her story and the battles that she faces.
The unrest in Hispaniola is literally jumping off the pages through Sarah Lark’s writing, especially once we are introduced to Francois Macandal. Macandal is a black man who sees himself as a form of spirit. He is planning a mass-killing of all the white people in Hispaniola. Known as the “Black Messiah”, it’s clear that he holds a lot of power over people and is a formidable character.
I am really conscious of not giving too much away in this review because I cannot urge you enough to discover this wonderful read for yourself. The way in which the story unfolds is simply fantastic and extremely well done. The characters are complex and absolutely fascinating to read about – regardless as to whether you actually like them or not.

I felt as though I learnt a great deal from Island of a Thousand Springs about this shocking period of history and I certainly feel the same about Island of the Red Mangroves. Once again Sarah has put an immense amount of research into her subject matter and it really shines through. When reading Sarah’s notes at the end of the book stating the true history of the Islands and which parts were fictional, you can really appreciate how much has gone into this book.
It’s also written in such a way that you will have no trouble whatsoever visualizing the settings. Sarah’s writing is full of animation and beautifully sets the scene.

If you are a fan of historical fiction then Island of the Red Mangroves just has to go onto your ‘must-read’ list. It’s riveting, and informative with a touch of romance. It’s also one of those books that just begs to be devoured in one sitting.

I can’t wait for the next installment…

A huge thank you to Hayley at ed pr for sending me a copy of Island of the Red Mangroves to read and review.  ♥

Sarah Lark, author of several bestselling historical fiction novels in Germany and Spain, was born in Germany’s Ruhr region, where she discovered a love of animals–especially horses–early in life. She has worked as an elementary school teacher, travel guide, and commercial writer. She has also written numerous award-winning books about horses for adults and children, one of which was nominated for the Deutsche Jugendbuchpreis, Germany’s distinguished prize for best children’s book. Sarah currently lives with four dogs and a cat on her farm in Almería, Spain, where she cares for retired horses, plays guitar, and sings in her spare time.