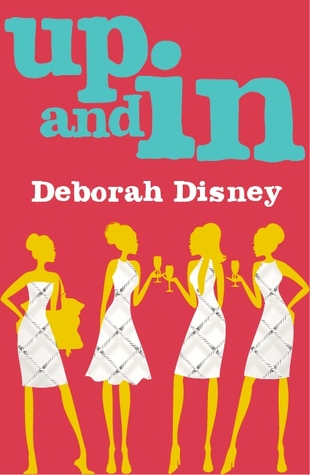 Distinctly middle-class parents, Maria and Joe have committed every bit of available income to giving their daughters Kate and Sarah the best education possible, which to them means attending the most exclusive girls school in the state. But when Kate befriends the spoilt and moody Mirabella, Maria finds herself thrust into a high society of champagne-swilling mother-istas she hasn’t budgeted for. Saturday morning netball is no longer a fun mother-daughter outing, but a minefield of social politics.

While the increasingly neurotic Maria struggles to negotiate the school mum hierarchy, Joe quietly battles a midlife crisis and Kate attempts to grow up as gracefully as possible (without having her life ruined by embarrassing parents).

For every woman who has ever felt she may be wearing the wrong shoes, this is a book that will remind you – you’re not alone.

Up and In follows the struggles that middle-class mother Maria faces as her daughters go to one of the most exclusive (and expensive) schools around, Riverton.
Her eldest daughter Kate has made friends with the awfully spoilt, over-indulged Mirabella, whose mother, Bea, is quite frankly rather terrifying. However after a shaky start, Maria is welcomed into Bea’s highly esteemed circle of friends.
However being one of the ‘beas’ is an expensive and time consuming business. There’s so much to think about. You can’t wear the same outfit twice, you have to always ‘reply all’ to group emails, and ideally you have to live on the ‘right’ side of the river (as opposed to the ‘wrong’ side.) Then there’s the politics of the school netball team, Red Rockets, of which Kate and Mirabella both play for.

It’s not long before Maria finds herself well and truly cast out of Bea’s social circle (i.e. she stops putting X’s at the end of her emails to Maria) which you may think is fine – if that’s how she wants to be…The only trouble is she can make life very difficult for poor little Kate as well as Maria. Like being an eight year old isn’t difficult enough, Kate has to deal with being ousted from her group of friends, strategically placed on the netball team to allow Mirabella to always be the star of the game AND deal with her mother behaving in such an embarrassing way in front of all of the other beas… Whoever said growing up was easy?

I loved, loved, loved the premise of this story. I often enjoy books about playground politics with parents who are in competition with one another at the school gates, but for me, Up and In took a story about ‘Yummy Mummies’ to a WHOLE different level and it certainly didn’t disappoint.
I really enjoyed how the battles were based around the netball court – which child was playing the best, which position they should be in etc. I can completely believe that there are bitter rivalries between the parents who are stood on the sidelines of the court. It also made for a pretty tense read when the matches were taking place. However, Up and In was about so much more than this.
Bea terrified me but she made of an amazing central character. I’m sure we all have a Bea in our lives; someone who you can never quite tell when they’re being genuine, someone who will be your best friend one minute and have nothing to do with you the next, someone who gets jealous, territorial, and pushy all whilst maintaining a perfectly coifed hair-do. I simply could not believe the extent of this woman’s rudeness and I really felt for poor Kate, whose life she was making a misery simply because she didn’t like Maria any more. Can you get much lower than that!? It’s amazing to see the hold that Bea has over the little B beas, though. It’s like they can’t see what she’s doing and how she’s manipulating everyone. She may be the devil wearing Louboutons, but she makes for great reading. Without giving much away the story has quite a satisfying ending where Bea is concerned too…

There were so many things I enjoyed about this book, especially Deborah’s style of writing. She really brings her characters to life, especially in Maria’s case. I loved Maria and could relate to her perfectly, she is your typical down-to-earth parent who gets slightly swept up in the hype when this beautiful, glamorous fellow-parent decides she wants to be her friend. Not many people would be able to resist Bea and her fancy Easter Egg Hunt parties…
Deborah’s writing flows so well and it such a pleasure to read. This is one of those books that you will start and look up from a few hours later in shock to find you’ve almost finished it. You can’t not become engrossed in these women’s lives, they are just fascinating. I will also admit that they are not all completely unlikeable, Nic is lovely and Lauren certainly has her redeeming features where furry vests are concerned…

I also really liked how the relationships were played out in the novel. I adored Maria and Joe, they made for such a strong couple (even when Joe went through his mid-life crisis and bought a Porsche) and I also really admired the relationship between Maria and Kate. It’s clear that Maria would do anything to make her daughter happy and feel as though she fitted in and as well as dealing with being ousted by the bea’s herself, she also has to watch her daughter be rejected by her friends too.
The other big shiny tick against this novel is its humour. It made me laugh-my-socks off. Deborah is such a witty, clever writer and she has got these women and their personalities nailed. They’re actually so realistic that it’s funny. There were times when I didn’t know whether to just sit there open mouthed in amazement or snort with laughter.
I am so excited that this is Deborah Disney’s debut novel. It’s accomplished, compelling and one of those novels that will tug at the heartstrings once minute and have you giggling the next. Warm, extremely well written and a complete delight to read. If you’re looking for a light, funny, yet insightful novel then congratulations – you’ve found it!

A huge thank you to Deborah Disney for very kindly sending me a copy of Up and In to read and review. ♥

Australian author, Deborah Disney, grew up in the regional city of Toowoomba and now lives in Brisbane with her husband and two school-aged daughters. Deborah has a BA/LLB from the University of Queensland and practised as a solicitor for a number of years prior to having children. She chose to specialise in litigation law as that seemed like the best preparation for what is now her looming battle – mothering her daughters through the teenage years. Deborah’s first novel, Up and In, is a satirical look at the interactions of school and sporting mums. She is expectant that the coming years may involve periods of everyone at her house locking themselves in their bedrooms and that this will provide her with plenty of opportunities to work on more novels about the relationships that life hurls us into.