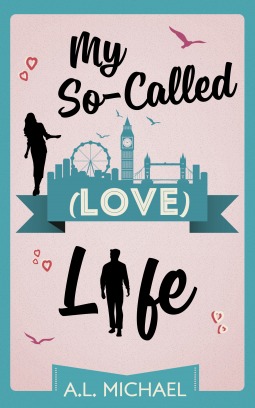 Tigerlily James has been a member of the Young and Bitter Club ever since she was dumped on Valentine’s day. By her fiancé.

Surviving on a diet of cynicism and margarita-fuelled ‘Misery Dinners’ with her best friends, she’s become a romance free zone…and that’s the way she likes it. Until an invitation for The Ex’s wedding arrives. Suddenly in need of a plus one, Tig has little choice but to bin the takeaways, ditch the greying underwear collection…and start pretending to view the opposite sex as something other than target practise.

Then, she meets Ollie – ie. the perfect solution. No sex. No strings. Fake boyfriend. The only catch is that she has to pretend to be his girlfriend for three whole months.

Dating without the heartbreak: the best idea Tig’s ever had, right? Wrong!

My So-Called (Love) Life kicks off by introducing us to lead character Tigerlily James (Great name, am I right!?) Tigerlily has been badly hurt by a past relationship (well, to be exact she was dumped on Valentine’s day, right before her wedding by the guy she’d been seeing since she was fifteen…) and has quite a bitter outlook on relationships, men and, well, life in general really.
Partaking in ‘Misery Dinners’ with her (also anti-romance) best friends, Ame and Dana, at their favourite haunt Entangled, Tigerlily (or Tigs as she’s known) thinks things can’t get much worse for her at the moment. Or at least she does until she receives an invitation to her ex’s wedding. Tigs realises that something has to give – and fast – as she’s going to need a plus one for the wedding. However, the answer to her prayers may have just arrived in the form of Ollie, the new barman working at Entangled. Not only is he drop-dead-gorgeous, friendly, funny and generally lovely (not that Tigs would notice…) but he’s willing to step in and help Tigs out by being her ‘fake boyfriend’. They’ll be no sex, no emotional involvement – none of the usual hassle that comes with having a relationship. Sounds perfect…

I was unbelievably excited about reading My So-Called (Love) Life. I adored A.L. Michael’s previous novels and going on the synopsis alone, I thought that this sounded absolutely perfect and a complete chick-lit treat. I love juicy story lines like this one, there’s something about two people trying to pretend to be a couple in order to stick one to the evil ex and My So-Called (Love) Life completely surpassed my expectations because it was a funny, uplifting and a massively enjoyable cracker of a read.
We’ve all been in Tigerlily’s shoes at some point and I could appreciate how she was feeling to a certain extent. The world looks a dark and lonely place when you feel as though you’re adrift and your plans haven’t quite turned out the way in which you’d always imagined. Because of this (and lots of other reasons, of course) I felt as though I bonded with Tigs pretty much straight away. She ticks all the boxes for a great heroine and has a pretty cool name. I loved the ‘Misery Dinners’ that she shared with Ame and Dana. Once again, who hasn’t got together and put the world to rights over a margarita or two with their friends? These three girls quickly become easy to identify with and will definitely make you chuckle. I love how their friendship is portrayed throughout the story – they’re not always in BFF-Mode and I like that – it’s real.
Now it’s time for me to swoon over Ollie for a bit, ok? You have been warned. This man is amazing, cute, caring (shall I go on?) but when he gets together with Tigs it is non-stop fun. I adored these two together. They just complimented each other so well, the difference in their personalities, yet the similarities of things they had been through. They were just wonderful and whenever they were together I was sat there with the biggest, dopiest grin on my face, ever.

A.L. Michael has done a sensational job at bringing her characters and their relationships to life. I had no trouble whatsoever visualising these characters, they are all perfectly formed in my head (especially Ollie *swoons* and Tigs’ parents…)
I also feel as though this is one of those books that I’ve taken away a lot from reading. It was such an uplifting, inspiring book. Seeing the change in Tigs and the fun that she has on the way was such a joy to read. I feel as though the humour, love and lightheartedness was offset perfectly with this being such a meaningful story that will no doubt have lots of readers nodding their heads in recognition.
Not only did this book have a good solid plot, but I found it to be really fast-paced too; there’s always plenty going on to keep your attention and you never quite know what’s going to happen which will keep you guessing.

My So-Called (Love) Life goes into the category of ‘Books I couldn’t put down’. It was such a moreish read, I just kept wanting more and more and more, and actually, I’d quite like to read it all over again. It was simply that good.
I especially love it when I can really relate to certain storylines and characters in books and this one seemed to really resonate with me. Sometimes everything to do with a novel can just ‘click’ together for you and this was definitely the case here. (And when I say everything, I mean EVERYTHING . Look at the cover…)

If you like your chick-lit fast-paced, funny and meaningful at the same time then download this book – it was made for you and it had firmly secured A.L. Michael a spot on my list of all-time-favourite authors.

A huge thank you to A.L Michael for giving me the opportunity to review My So-Called (Love) Life and for inviting me to be a part of the blog tour. ♥

She’s a fan of cheap wine, expensive chocolate and still wants to be a secret agent when she grows up, but she’ll settle for lying on the page.

4 thoughts on “Book Review: My So Called (Love) Life by A.L. Michael”