I have a really exciting giveaway for book lovers this week. There are 3 copies of Full Brazilian by Teena Lyons and Cintia Silva up for grabs. Released in January 2015, Full Brazilian is a true story about the co-author of the book, Cintia Silva, moving to the UK and finding work as a lap dancer. It sounds to me like a juicy, shocking and unputdownable kind of read which I am really looking forward to. You can find out more and see what others are saying over on Amazon and Goodreads, but to be in with the chance of winning a copy of your own click on the Rafflecopter link below. The Giveaway ends Monday 15th June. Good Luck! 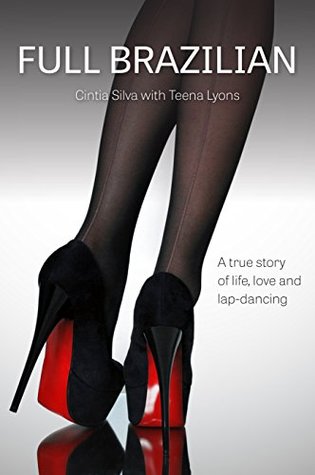 “Brazilian model Cintia Silva arrived in the UK with little else but a burning desire to make some money and turn her life around. After quickly finding she could barely scratch a living in the hugely competitive modeling arena, she plunged into the murky but multi million pound world of lap dancing. Sacked from her first club within the first week, thanks to some distinctly nasty behaviour from jealous co-dancers, Cintia resolves to re-invent herself. After creating a seductive new stage persona, Gabriella, she perfects her look and her skills and takes the lap dancing world by storm. She rapidly becomes one of the UK s highest grossing dancers, performing in London, Paris, New York and Brazil, often netting £1000s in an evening. In Full Brazilian, Cintia lays bare what really goes on in the opulent world of gentlemen s clubs and the truth behind the rich and glamorous clients who live life in the fast lane. She tells of her struggle to find love and acceptance – and how her unusual lifestyle finally helps her come to terms with the demons of her past. Intimate and very revealing, Full Brazilian has it all: glamorous girls, firm friendships, illicit sex, treachery and big, big money.”

“Teena Lyons started Professional Ghost after over ten years in journalism, specialising in the consumer and business sectors and writing for popular household publications such as The Sunday Times, Cosmopolitan and the Guardian.
After Teena’s first non-journalistic project – a novel written in collaboration with Allan Leighton of Pandora and Asda – went down a storm, she decided to leave the papers behind in order to pursue a career in the niche behind-the-scenes industry of Ghostwriting.
Professional Ghost is now a huge success; Teena has co-written over twenty books with celebrities and industry leaders from an impressive range of backgrounds. The company has also grown to incorporate a number of Fleet Street journalists, and now specialises in editorial and publishing work as well as the central mantra of Ghostwriting.
Teena has successfully combined skills from a colourful career history in Public Relations, Marketing, Media and (of course) Journalism to create a critically-acclaimed business with glowing reviews from past clientele. Further previous collaborators include Deborah Meaden, Bill Grimsey, and Mike Green.
Teena’s first independent novel, The Complete Guide to Ghostwriting, was released in late 2014, and aims to raise awareness and answer all common queries about this little-known profession.”

You can find more info on Teena’s website:
http://www.professionalghost.com/

*Please note this Giveaway is UK only.