I am hugely excited to be a part of the #LadLit tour for Steven Scaffardi’s debut novel, The Drought. I am a huge fan of the ‘lad-lit’ genre lately and I’m so pleased that more and more strong male authors are making a name for themselves (I’m talking Jon Rance, Matt Dunn, Nick Spalding…ALL amazing writers) I am currently reading (and loving! And chortling at!) The Drought – it’s one of those laugh-a-page books and I’m enjoying it so, SO much. I was thrilled to be able to quiz Steven about his novel and he also spills the beans on the all-important follow-up book, The Flood!

Hi Steven, welcome to Bookaholic Confessions! Thank you so much for participating in this interview. Would you like to start by introducing yourself…?

Hi Holly, thanks for having me! Well as you know my name is Steven and I am the author of The Drought and The Flood; two comedy books about relationships from a man’s point of view, and both part of the Sex, Love & Dating Disasters series.

Can you tell us a bit about your debut novel The Drought (Sex, Love and Dating Disasters)?

I sure can! The Drought is the laugh-out-loud tale of one man’s quest to overcome the throes of a sexual drought. After the stormy break-up with his girlfriend of three years, Dan Hilles is faced with the daunting task of throwing himself back into the life of a single man. With the help of his three best pals, Dan is desperate and determined to get his leg-over with hilarious consequences!

…And also about your follow-up to The Drought, The Flood (released April 2016)?

The Flood picks up where The Drought left off, although it’s written in a way that you don’t have to have read the first book to pick up the second. This time round Dan makes the mistake of making a bet with his best friends that he can juggle more than one girl at the same time, and a series of comical situations ensue as Dan buckles under the pressure of dating his ex-girlfriend, a stalker, the office ice queen, and the one that got away. It is available now to pre-order for just 99p (http://www.amazon.co.uk/Flood-Love-Dating-Disasters-Book-ebook/dp/B01D1U7Z0I/ref=asap_bc?ie=UTF8). It will be released as an eBook on April 30 and the paperback will be available on May 19.

I am really looking forward to reading both books; they sound brilliant! I have to ask – are there elements of yourself in your lead character Dan Hilles or is he entirely fictional?

Unfortunately yes! The Drought is loosely based on a period in my life in my early 20s. I had just come out of a long-term relationship and had basically forgotten how to talk to girls and struggled getting myself into the dating game! Both books take stories from personal experiences or those of friends, and I sprinkle a large dose of exaggeration on top for comedy effect. It’s funny watching my wife read the books and then turn to me and say: “Please tell me this bit didn’t happen to you!”

Chick Lit Plus described your debut novel as ‘Chick Lit for Men’ I think chick lit novels written from a male perspective are such a great idea, but what’s it like writing for a genre that is dominated by female authors?

It’s hard in that you are going against the norm. Chick lit is normally written from the female point of view so (most of) the readers can relate. Plus they all tend to have a HEA ending. But lad lit is more like the frowned upon little brother of its more successful chick lit sibling. I think the biggest problem is that most readers are simply not familiar with lad lit or it has a bit of a stigma attached to it. But I’ve had lots of readers – male and female – read my books who have never picked up a lad lit novel before and told me how much they enjoyed it. As the series name suggests, it’s about the fun side of dating that doesn’t always go right, yet most people will admit they are the stories they remember the most. 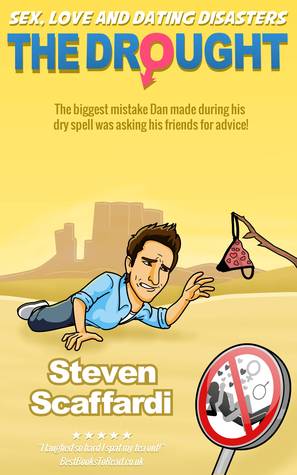 As well as being a writer you are also a stand-up comedian. Is it a profession that is as terrifying as you might imagine?

I haven’t actually done any stand-up comedy since 2012 – the day job took over I’m afraid, but when I used to do stand-up I can honestly say it was the best buzz I’ve ever had. Yes, the first time it was terrifying but once you start to find your rhythm and have a few jokes in your back pocket that will guarantee an odd laugh or two, it becomes less daunting. The nerves are always still there (the prospect of dying on stage is never far from your mind) but it becomes like a drug. The better you get at it, the more you look forward to getting up on stage. I miss it, but I had to find a way of paying the bills and unfortunately I wasn’t that funny so I had to stick with the 9-to-5.

I have always enjoyed being a storyteller and like most people I always thought I had a book in me, but it wasn’t until I was around 24 or 25 that I thought about it seriously. I studied journalism at university, wrote for a few magazines before becoming sports editor for a local paper. I quit journalism when I was around 27 because the money wasn’t great, but that love of writing and storytelling never went away.

I think it’s the same thing as being a stand-up comedian – it’s being able to make people laugh. Seeing somebody laugh out loud because something you have said or written is hugely satisfying. I think it’s an incredibly difficult art that probably doesn’t get the credit it deserves. I have huge respect for stand-up comedians who go on stage and make people laugh for an hour. The longest set I ever did was 15 minutes and trying to come up with enough material to last 15 minutes was challenging enough let alone a whole hour. It is the same with writing a comedy novel. Writing 300+ pages of funny situations has its challenges, but so far, so good.

I like anything from my fellow lad lit authors to thriller and crime novels. My favourite authors at the moment are Danny Wallace, Jeff Abbott and Ben Mezrich, but my favourite book in recent times is the Bourbon Kid series. I can’t tell you the authors name because he is anonymous, but his novels are just brilliant.  Imagine Quentin Tarantino in a supernatural world full of wonderful movie clichés. They are such good fun to read.

I have only recently finished writing The Flood so I am busy trying to promote that at the moment, but I am already work on the framework for my third book. This is a bit of an exclusive for you as I haven’t told anyone else this yet. At the moment the working title is called The Pact and it is the third book in the Sex, Love & Dating Disasters series. This time round, Dan and his pals travel to Latvia and get themselves into all sorts of trouble with a bunch of gangsters, drag queens, pimps, cops and lots more. It’s a little bit different to the first two books, but I love writing about these characters so much that I’m hoping other people and fans of the series will like it too.

A huge thank you to Steven for participating in this interview and having me on board the Lad Lit blog tour! ♥

Steven Scaffardi studied journalism at The London Institute. His first novel The Drought received praise for its hilarious take on how the male mind works when it comes to the opposite sex, being labelled chick-lit for men, and was runner-up in the Shirley You Jest book awards. In 2011 he spent 12 months on the open mic stand-up comedy circuit, making it to the final of the Golden Jester competition. He lives in Carshalton, Surrey with his wife and his baby daughter, and is busy promoting his second novel The Flood.