My writing process by Charlotte Butterfield

I was on my maternity leave from my dream job as a magazine editor for a homes and interiors magazine when I start writing what was to become Me, You and Tiramisu. I think, like most journalists I always assumed one day I’d write a novel, but it wasn’t until both my elder two children were at school one day, the youngest was asleep in the magic vibrating chair that I thought, I literally have nothing to do. Of course, I could have slept, which is what everyone always tells new mothers to do when the baby sleeps, or I could have tackled the mountain of dirty clothes that had started to block the natural light from entering my kitchen. But instead, I decided to see if I could turn the plot idea I’d had for a while into a story. I didn’t give myself any deadline, or pressure of word counts, I just sat at my keyboard and started to type.
It was such a strange sensation, after fifteen years of writing to strict briefs and commissions, to suddenly have the freedom to arrange words in whatever order I wanted was incredible. I started off tentatively at first, second guessing every sentence – does that sound right? Should I write in the first or third person? Past or present tense? Somehow I just carried on until I found a voice that felt natural. And it sounds really clichéd, but the more I wrote, the faster my fingers flew over the keyboard, and my characters started coming to life. There were a few plot twists in Me, You and Tiramisu that I didn’t even see coming until the words appeared on the screen!
Thankfully my baby was one lazy boy and slept a lot, so I finished the novel in about four months. I edit as I go along, writing a couple of thousand words, then re-reading what I wrote the day before with a strong cup of coffee the next morning, and changing any bits before starting on the next chapter or scene. When I had the whole manuscript ready I gave it to my husband, also a former journalist, who attacked it viciously with a red pen. “You’ve gone from past, to perfect, to pluperfect to present all in one sentence!” I remember him sighing in frustration at one point. Although at the end of it he did give me the glowing feedback of, “It’s actually quite good, although chick lit’s not really my thing.” You can’t ask for fairer than that, can you?

A huge thank you to Charlotte and to Samantha Gale. 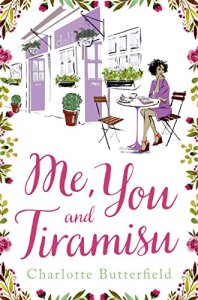 The love story of the year!

Fall in love with the perfect feel-good romance for fans of Katie Fforde, Jill Mansell and Carole Matthews.

It all started with a table for two…

Life for self-confessed bookworm Jayne Brady couldn’t be better – she has a twin sister she adores, a cosy little flat above a deli and now she’s found love with her childhood crush, gorgeous chef Will.

But when Will becomes a Youtube sensation, thanks to his delicious cookery demos (both the food and his smile!), their life of contentment come crashing down around them. Can Jayne have her Tiramisu and eat it?