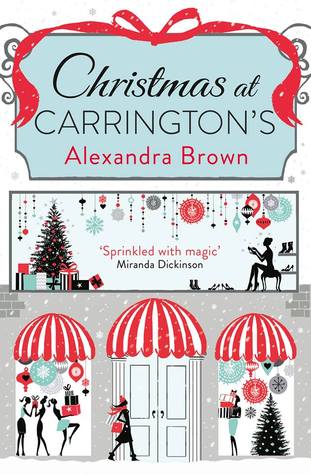 Georgie Hart loves Christmas time at Carrington’s Department store. Running the luxury handbag department, Georgie adores helping customers in the hunt for the perfect gift for the perfect someone. And this year is no exception – now she has the hunky Tom, Mr Carrington himself, to spend the special day with.

But when Tom springs a surprise, Georgie’s plans are thrown into chaos. Carrington’s is getting a fresh lease of life in a hot new reality TV show, featuring formidable retail guru, Kelly Cooper.

As the first show airs, Georgie is shown in a far from flattering light. Worse is to come when Kelly’s vile daughter appears to get her claws into Tom. Georgie fears this will be the worst Christmas ever, but Santa still has a little surprise for her stocking this year – she’ll just have to wait until Christmas to find out…

Christmas at Carrington’s is Alexandra Brown’s sequel to the brilliant Cupcakes at Carrington’s. We join all the familiar faces at Carrington’s in Mulberry-On-Sea as the store is preparing for Christmas. Georgie is loved up with the store owner, Tom Carrington and looking forward to their first romantic Christmas together. However, Georgie’s in for a surprise when she finds out that Carrington’s has signed up to be part of reality / ‘dramality’ TV show, Kelly Cooper Come In Store, which ends up taking Tom all over the world and bringing in some very unwelcome characters in an attempt to try and turn the stores fortune around…

I really enjoyed Cupcakes at Carrington’s, so I was really looking forward to Christmas at Carrington’s, especially seeing as it was a Christmas themed novel too…what’s not to like!? Christmas at Carrington’s definitely didn’t disappoint. I thought that the idea of Carrington’s featuring of a reality show was a genius and I’ve never read any novel that covers that kind of story before, so it was something a bit different. Yet at the same time, it’s totally believable. If you’re a fan of TOWIE or have ever seen any of the Mary Portas shows then this will appeal to you. It really makes you think about how these shows are edited and what’s real and just for the cameras. Especially the scene where Georgie gets caught on camera shaking her booty to Single Ladies and doesn’t know anything about it until it appears on her own TV screen. Although she’s horrified at first, once the offers of magazine columns and free Louboutin’s come rolling in she starts to change her mind.
All of the fabulous characters from Cupcakes at Carrington’s are here, including Georgie’s best friend Sam and the fantastic Eddie who fits right in to the famous lifestyle. There are also some pretty unlikable characters in this novel too who you’ll love to hate, and I think it goes to show how brilliant Alexandra’s writing is that she can create such strong emotions towards characters. I feel this is especially true where Georgie is concerned. I think she is possibly one of my all time favourite heroines and has a heart of gold. I love the friendship between Sam, Eddie and herself and her relationship with her estranged Dad was fantastic too. She is such a strong character that you can’t help but root for her, she’ll make you laugh, make you cry and so much that happens to her is all to familiar!
I loved reading about Carrington’s and the way Alexandra Brown writes about the store is brilliant. It’s so authentic you can visualise everything that she says and it all goes towards making the story feel that bit more realistic. (I could practically SMELL those gorgeous handbags…!)

There are plenty of hilarious moments in this book, but also a fair share of touching, teary eyed ones too. It really is an engaging, warm story that will definitely get you in the mood for Christmas (or at least for some Christmas shopping! I wish I had a Carrington’s store near me…Can we not get one open in the Midlands?)

The cover is gorgeous and sparkly but not so much so that it wouldn’t appeal to a reader all year round, it’s both classic and understated yet it’ll definitely grab your attention. I was so pleased that at the end of the story it said ‘To be continued’ as I am growing to love this series already and I’m really looking forward to the next chapter in Carrington’s life…

Christmas at Carrington’s is a favourite of mine from last year so I thought I would share this review. It also satisfies my  appetite for glitzy, warming Christmassy books perfectly! If you’ve enjoyed the Carrington’s series to date then you’ll know this is worth a re-read for the up-and-coming festive season. You’ll have no trouble getting into the Christmas spirit after a read of Christmas at Carrington’s. There’s food, shopping and romance; the perfect recipe for Christmas…

Don’t forget to check out Alexandra’s new festive release for 2014, The Great Christmas Knit Off, which is released on 9th November, published by Harper. Click to pre-order. My excitement knows no bounds!

Alexandra Brown began her writing career as the City Girl columnist for The London Paper – a satirical diary account of her time working in the corporate world of London. Alex wrote the weekly column for two years before giving it up to concentrate on writing novels and is now the author of five books, including the Carrington’s series. THE GREAT CHRISTMAS KNIT OFF is first in a new series set in the fictional village of Tindledale, following the lives of all the characters that live there.

Alex lives in a real village near the south coast of England, with her husband, daughter and a very shiny black Labrador.