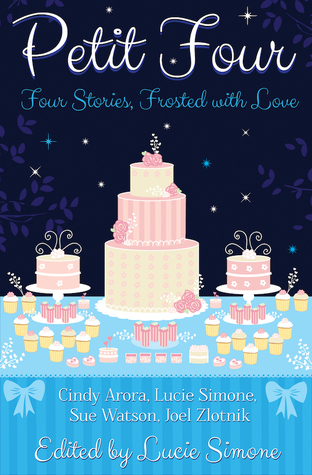 Cake is often a major part of life’s celebrations, both big and small. From birthdays to wedding days, cake, in all its delectable concoctions, marks joyous occasions with a sweetness that can’t be beat. But even better is the love that is shared when two people connect over a sweet confection. Maybe it’s a cute new guy wreaking havoc on a broken heart, or a beautiful woman testing the limits of love, or an old beau stirring up long lost desires. Whatever the circumstances, cake can always be relied upon to save the day when it comes to affairs of the heart.
In this collection of short stories, cake is the delicious center around which each tale unfolds and romance blooms. When single mom and journalist, Olivia, sets out to find romance in Cindy Arora’s “Cake Therapy,” she gets a little help from her friends and more than a few slices of cake to coax her off the couch and into the arms of a truly great love. Lucie Simone’s “Aprez Vous” finds success-driven Tara in Paris reminiscing of her long lost love, Jean Marc, and her niece bound and determined to reunite them. In “The Heart-Shaped Secret of Raspberry Jam” by Sue Watson, cake enthusiast, Milly, meets her match in the kitchen, and other places, when new owners take over the tea rooms where she works and her talents and her heart are put to the test. And Scott, mayor of a small seaside community, flirts with political suicide in Joel Zlotnik’s “Her Charms” when he falls for new-in-town Nicole, an entrepreneur with a passion for cupcakes and whose latest venture proves a little too sexy for the sleepy beach town. From San Francisco to Paris, from small towns to tea rooms, this anthology tempts readers with humor, style, romance, and the powerful aphrodisiac that is cake. Petit Four is four stories, frosted with love.

Petit Four is a delightful collection of four stories all with an underlying theme of CAKE, GLORIOUS CAKE!
First up we meet Tara and her niece, Marissa in Aprez Vous by Lucie Simone. The pair are taking a break in Paris as a graduation treat for Marissa and are looking forward to some sightseeing and sampling some French delicacies. However, for Tara, Paris holds a special place in her heart as it’s where she first fell in love back when she was a teenager.
Then there soon turns out to be a lot more on the cards for Tara than just visiting the local patisseries when she tracks down her first love…
I really enjoyed Aprez Vous; it made Paris come to life for me and I was enchanted by Tara’s story. I loved the inquisitive Marissa as she tries to re-unite Tara with the estranged Jean Marc and I was desperately hoping they got their happy ending.
As much as the relationship between Tara and Jean Marc is still in my mind the main thing I’m still thinking about from Aprez Vous is, of course, the confectionary. I’d love to sample those Petit Fours that Jean Marc so expertly made.

Next up is Cake Therapy by Cindy Arora. I’ve never read anything by Cindy Arora before but Cake Therapy was probably my favourite story of the four. I loved it.
Set in San Francisco, Cake Therapy tells the story of the friendship of Pulitzer Prize winning reporter, Tammy and newbie reporter, Olivia Cisneros. Tammy and Olivia bond over some serious ‘Cake Therapy’ at Dixie’s bakery (which sounds out-of-this-world…Can I visit, please!?)
However, when Tammy moves away Olivia is less than impressed with her replacement. For starters the new Tammy is… a man called Henry.
It appears Olivia has got herself stuck in a bit of a rut and without Tammy to help her navigate the ups and downs of her life as a single mum with a demanding job and an ex who has what seems like a new girlfriend every week, Olivia starts to realise that it’s about time she stepped out of her comfort zone and the very person to help her turns out to be no other than…you guessed it…Henry.
Despite this only being a short story I really bonded with Olivia and also fell a little in love with Henry (an adventurer-type guy who loves cake…come on, what’s not to like!?) I loved their story and how Olivia warmed to him despite her reservations. This was a charming story about stepping out of your comfort zone and taking risks. It was funny, inspiring and all round lovely.

Thirdly we’ve got The Heart Shaped Secret of Raspberry Jam by Sue Watson in which we meet Milly, a waitress at a Victorian Tea Room whose passion for baking and all things cake is truly infectious. The Tea Room is run by the awful ‘Scary Mary’ who is determined to keep Milly firmly outside the kitchens and as a waitress and despises Milly’s extravagant cake ideas in place of the more traditional. However, when the Tea Rooms are put up for sale it seems that things are set to change for Scary Mary, Milly, her fellow waitress, Kate, and the tea-rooms very own cat, Cupcake.
I LOVE Sue Watson so was extremely excited about this story and it didn’t disappoint. Written in her usual warm and witty style it’s full of romance, there’s plenty of funny and sweet misunderstandings, and ultimately a message that people aren’t always what they seem… Then there’s the cake. Wozers, Sue made my mouth water with her descriptions of Milly’s cake creations and really made her passion for confectionary shine through. I loved Milly’s blog; if it was real I would be SURE to subscribe and have those delicious recipes landing in my inbox. The Heart Shaped Secret of Raspberry Jam is a hunger-inducing yet extremely satisfying contribution from Sue Watson, reminding me why I love her so much.

Then last but not least there’s Her Charms by Joel Zlotnik which tells the story of widowed Mayor of Ola Vista, Scott Lyons. Scott ends up falling for one of his new neighbours, lingerie entrepreneur, Nicole. Then follows a whirlwind romance between the two whilst Nicole regularly sends Scott sets of cupcakes (complete with gorgeous charms.) However, when Nicole comes up with the idea to open up a lingerie shop named ‘Her Charms’ in the small community of Ola Vista, will Scott listen to the concerns of the local residents or stand by the girl who has made him fall in love again?
I’m yet to read anything by Joel Zlotnik, but once again this story is a cupcake infused delight. It was quite a thought provoking addition to the collection and I liked how it was written from the male perspective as we got to see Scott’s take on romance, moving on from the past…and of course, CAKE!

Before you attempt to read this sugary sweet selection of stories I have to warn you – it WILL make you hungry.
I really enjoyed Petit Four and the clever way in which cakes were intertwined into each story and the significance that confectionary played. There’s friendship, romance, family, relationships, tragedy, dreams, plus a whole lot more and I loved how cake is always present throughout.
Unlike other collections of short stories I think that to appreciate this book at its fullest you’d need to read each story separately rather than racing through the collection as a whole. Whilst they are ‘short’ stories, they’re not exceptionally short and will probably take you half an hour to an hour to read each one. You will easily become as immersed into each story as you would with a full length novel, so to appreciate each one and its set of characters I would recommend reading them one at time, but hey – if you like to scoff your cakes all in one go then there’s nothing to stop you gobbling up Petit Four in one sitting either; the choice is entirely yours!

A big cake-infused thank you to publishers, Simon and Fig and to Kim Nash for the opportunity to read and review Petit Four. ♥

Lucie Simone has a passion for travel, romance and all things chick lit. She also has a degree in Journalism and a Master of Fine Arts in Television Production. She is the author of novels, Hollywood Ending and Picture Perfect, both offering an insider’s take on life in the City of Angels. Her love of comedy (and living under the delusion that she might one day be an actress) resulted in a stint studying improvisation, which, ironically enough, taught her to be a better writer. She lives in Los Angeles (and loves it), but considers New York City her imaginary second home and visits the Big Apple as often as her bank account will allow. For more information on Lucie, please visit her website at www.luciesimone.com.

Cindy Arora was a staff writer at The San Gabriel Valley Tribune, The Orange County Register and Sacramento Magazine. She’s been published in Saveur, Tasting Table, Orange Coast Magazine and Fodor’s. She’s also mama to an adorable little boy, a feminist, a whiskey enthusiast, and proud to call herself a Chick Lit author. She is the author of Heartbreak Cake, a delicious debut novel, and a contributor to the anthology, Merry & Bright, with her story, “Christmas at Mulberry Inn.” To learn more about Cindy, please visit www.cindyarora.com.

Sue Watson is a former BBC TV Producer who woke up one morning to the realisation that there was no such thing as ‘having it all.’ Marriage, motherhood and a full-time career were taking over her life and what she really wanted to do was stay home all day, bake and eat cake, watch reality TV and write… in that order. So she quit the day job, baked a year’s supply of cupcakes and chased the dream. What followed was a lot of cake and many hours in the company of ‘The Real Housewives of New Jersey,’ ‘The Biggest Loser,’ and ‘Keeping up with the Kardashians.’ During this, time Sue also managed to write a few books too: Fat Girls and Fairy Cakes; Younger, Thinner, Blonder; Love, Lies and Lemon Cake; and her latest cake offering, Snow Angels, Secrets and Christmas Cake. Learn more about Sue by visiting www.suewatsonbooks.com.

Joel Zlotnik is a former Southern California journalist who was lucky enough to find a second career on the other side of the notepad, answering questions instead of asking them. He recently cancelled his cable so he would write more and quickly discovered online binge watching. You can find him living at the beach in South Orange County, where he listens to records, reads and watches the waves. Find some of his essays and short fiction at http://www.joelzlotnik.com.