It’s with huge excitement that I am joined by the lovely Angela Marsons on Bookaholic Confessions today! Angela’s debut novel with publishers Bookouture, Silent Scream, is released TODAY (click here to get hold of your copy) and it is no exaggeration to say that this novel is incredible, I enjoyed it so much and my review will be up later on today, but for now it’s over to Angela as we chat DI Kim Stone, the Black Country and what it feels like to be Bookouture’s first ever crime/thriller author…

Hello Angela, a big, warm welcome to Bookaholic Confessions! Thank you so much for participating in this interview. Would you like to start by introducing yourself…?

Hi Holly, thank you for inviting me to Bookaholic Confessions.  My name is Angela and I’m an alcoholic.  Ooops, sorry, wrong group!  I live in the Black Country with my partner, Julie, our bouncy cream labrador and a parrot with a potty mouth.

Can you tell us a bit about your debut novel, Silent Scream (released 20th February 2015 by Bookouture)?

Silent Scream is a crime novel set in the Black Country that follows the fiesty DI Kim Stone as she tries to solve a string of murders whilst uncovering the secrets buried in the grounds of a derelict Children’s Home.

I love the sound of Silent Scream and can’t wait to read more about DI Kim Stone’s investigations. What inspired you to come up with the idea for the story?

As a teenager I would pass a local Children’s Home on the bus.  I always wondered if the occupants were abandoned, neglected or naughty.  The whole building seemed to be shrouded in mystery and sadness.  I found myself wanting to know their stories and understand their journey and the impact of being placed in such an environment.

Is DI Kim Stone completely fictional or is she based on anyone in real life?

Is Silent Scream going to be the first in a series of novels staring Kim?

Yes. I think Kim is going to around for a while yet.  She certainly seems to have a lot to say.  The second novel EVIL GAMES is a Psychological Thriller where Kim is pitted against a female, sociopathic psychiatrist that uses her patients for experimental purposes.

How did you go about doing the relevant research for Silent Scream?

I have always been proud of the Black Country heritage and its prominence in the Industrial era.  I wanted to delve deeper and understand the difficulties the area had faced since the steel manufacture and coal production industries declined over the last 30 years.  The more I learned the more I realised it was the perfect backdrop for a character like Kim Stone.

I researched Archaeology, Osteoarchealogy, Post Mortem procedure and Torture methods through articles and books.  I often wonder what the authorities would make of my Amazon ‘Items Purchased’ list. 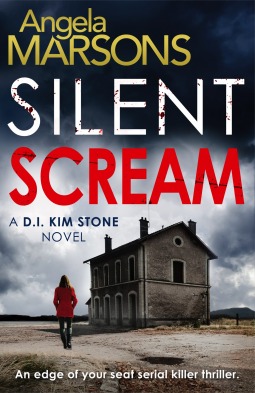 Congratulations on being Bookouture’s first ever crime/thriller author! How does it feel to have your novel out in the big, wide world?

I am totally thrilled to be Bookouture’s first crime/thriller author.  I am humbled that they chose me to launch their Crime/thriller element.  I couldn’t wish for a team that is more knowledgeable about the industry and so passionate about their authors.

I am terrified, elated and excited that my novel is going out into the world.  Like giving birth to a child there has been blood, sweat, tears and a whole lot of pushing.  And like any doting mother I am incredibly proud of my creation yet fearful that someone will think I have produced an ugly baby.

The best thing for me is not knowing where the journey will take me.  I begin with a loose idea of the plot and then I just start writing.  It is exciting as a writer when the story or characters begin to dictate the journey.  In one novel the murderer turned out to be a completely different person to the one I had envisaged.  In Silent Scream a character I had intended to kill is still alive and kicking, fictionally speaking, of course.

There have been many ups and downs over the years and I have many lovely letters from Publishers, however they all contain the word ‘unfortunately’ somewhere.

Battered by rejections I stopped submitting my work but never stopped writing.  My partner gave me a soundbite that has never left me.

A couple of years ago I began to send out submissions again and was plucked from the slush pile by my fabulous editor, Keshini Naidoo, while working at a London Literary Agency.

Although the relationship with the agency didn’t work out, Keshini never forgot me or Kim Stone.

In September 2014 Keshini contacted me and told me she had sent Silent Scream into a fresh, dynamic publisher called Bookouture and asked if I minded.  There was no hesitation in my response.

A few days later Claire sent me a note stating she was reading and very much enjoying the book and asked what other ideas I had for the character of Kim Stone.

Their enthusiasm for both my writing and my characters just blew me away and two weeks later I signed a four book contract with the Bookouture team.  Oliver, Claire, Kim and Keshini are incredibly knowledgeable about the industry and passionate about their authors and I wouldn’t want to take this journey with any other team.

I enjoy Crime stories and Psychological Thrillers.  I’m especially drawn to books where the main characters are less than perfect and a little mysterious.  Carol O Connell’s Kathy Mallory is almost sociopathic yet is intriguing and mysterious.  Val McDermid’s Tony Hill is one of my all time favourites.

I am expecting to work on edits soon for the second Kim Stone book called EVIL GAMES.  Additionally my letter to Santa included a request for books on Dolls and Body Farms!

A huge thank you to Angela for participating in this interview and to Kim from Bookouture. ♥